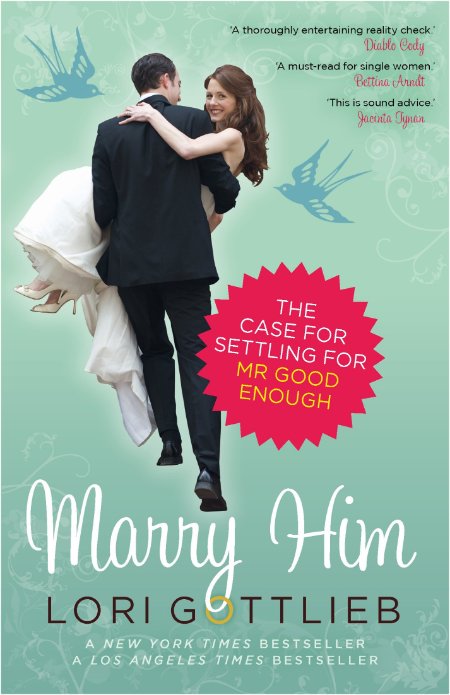 Description:
Wonder why you’re still single? Had you imagined you’d be settled down with the perfect man and family by now? Afraid time is running out? You might want to listen to what Lori Gottlieb has to say. When Lori found herself forty and still single, she came to an uncomfortable realisation. If so many of her friends were very happily married to ‘good enough’ guys, the type of men who might not make you weak in the knees but made great partners and fathers, maybe she had been looking for the wrong man. Could her Mr Right have been, well, right in front of her all along? Funny, confronting and very real, Marry Him is Lori Gottlieb’s account of her search for a partner and the adjustments she had to make to her own expectations in order to find happiness. ‘A must read for single women in their late twenties and thirties.Gottlieb is onto something, nailing critical reasons so many single women miss out on marriage and motherhood.’ Bettina Arndt **

From Booklist
Starred Review Gottlieb, 37, made the decision to become a single parent after years of searching for Mr. Right. Four years later, when she still hadn’t found him, she decided to take a good look at her dating habits-and the dating habits of women around her-to see if the problem is not a dearth of good men but rather women’s expectations of them. Gottlieb finds that women want it all-and often aren’t willing to compromise on their list of traits their ideal mate must have. In their twenties, many women leave good relationships based on an elusive feeling that they could find something more with someone else, and they regret it down the road when their choices dwindle. It’s not that women aren’t willing to settle; it’s that many refuse to recognize that their vision of the perfect man doesn’t match reality. With the help of dating coach Evan Marc Katz, Gottlieb reconsidered her own standards in the hope of finding happiness. Gottlieb’s honest, astute analysis will resonate with many women and make them uneasy as they recognize themselves in her experiences and those of the women she interviews. Gottlieb makes a strong case in this groundbreaking work. –Kristine Huntley

Review
"An unexpected delight. Honest and darkly comic… the truth can be liberating."
– The New York Times
"Marry Him is surprisingly, unnervingly convincing."
– O, The Oprah Magazine
"Funny and relatable… anything but antiromance."
-People magazine
"A sensible plea to discard the toxic fantasy of romantic comedies and think realistically about what makes a solid partnership."
-Salon
"This is the smartest relationship book I’ve read in years."
– AOL’s lemondrop.com
"This impeccably researched tome is mandatory reading."
– The Huffington Post
"Marry Him shows women how to find true happiness when seeking love–by giving them a new way to look at the world. Gottlieb manages to be hilarious yet thought-provoking, light-hearted yet profound on the questions of: Why do we fall in love? What qualities really matter in a marriage? For what reasons do we make the decisions that affect our whole lives? Marry Him will set people talking for years."
– Gretchen Rubin, New York Times bestselling author of The Happiness Project
"I wish I could round up every single woman I know and assign this book for discussion. Marry Him is a big fat lesson in how not to get in your own way. Any woman who wants to find true love and hasn’t been able to should read this book."
– Pepper Schwartz, Ph.D., relationship expert at Perfectmatch.com
"A well-conceived and convincing argument on how to find a more realistic Mr. Right. If you’ve ever sought your own Prince Charming, your love life will never be the sameagain. And that’s a good thing." – Christian Science Monitor
"Marry Him is a frank and funny read, weaving real people’s stories with Gottlieb’s own experiences, and containing sharp examinations of how society and culture-everything from When Harry Met Sally to The Bachelor-come into play when modern women look for love."
-The New York Observer
"A provocative pop culture treatise… she encourages us to think through our own beliefs and unexamined assumptions."
-The Chicago Tribune
"The buzz surrounding Lori Gottlieb’s newest book, Marry Him, is well- deserved… She writes with honesty and hope, and there are many people who will benefit from reading this book."
– The Examiner
"What Gottlieb is saying isn’t subversive–it’s smart. A thoroughly entertaining reality check."
– Diablo Cody, Academy Award-winning Screenwriter of Juno
"Finally, here’s a cautionary tale for anyone wondering why she hasn’t found Mr. Right–with a hopeful message about the Mr. Right Nows, the Mr. Close Enoughs, and even the Mr. What the F*#%s."
– Jill Soloway, writer and executive producer for Six Feet Under  and Transparent
"Engaging, hilarious, and eye-opening! Marry Him is an encouraging story about finding love by getting real."
– Rachel Greenwald, New York Times bestselling author of Find a Husband After 35
"This is a daring and wise book. Women (and men) should take Gottlieb’s message to heart: ‘Look for reasons to say yes.’ It could change your life."
– Helen Fisher, Ph.D., Rutgers University and author of Why Him? Why Her?
"I have been very happily married for many years, and if my daughters ever ask me for advice about potential spouses, I plan to pass off a lot of what’s in this book as my own sage wisdom."
– Kurt Anderson, New York Times bestselling author of Heyday and host of public radio’s Studio 360
"Lori Gottlieb’s smart, insightful, witty observations gleaned on her own unusual romantic path signal and important new voice in single-girl lit. The Rules turned single women needy, He’s Just Not That Into You made them depressed, and Marry Him finally sets them free, preaching that in the long run, ‘good enough’ might be better than great."
– Amy Sohn, author of Prospect Park West
"By telling you to read Lori Gottlieb’s incisive and insightful book, I hope I can make up for all the unrealistic romantic propaganda I had a hand in spreading as a former editor at a glossy women’s magazine."
– Megan McCafferty, New York Times bestselling author of the Jessica Darling series